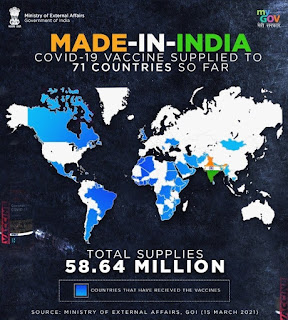 In January 2021, India initiated Operation "Vaccine Maitri," a landmark moment in the country's history of aid to developing countries. India is extending a helping hand to others, led by the holistic philosophy of “Vasudhaiva Kutumbakam” (the universe is one family), with the conviction that if illness prevails in any corner of the world, Indians remain vulnerable. Today's world The well-being of 1.3 billion Indians cannot be differentiated from that of the planet's remaining 6.3 billion inhabitants in today's interconnected world.

India produces 60% of all vaccines produced around the world. The WHO's director-general recently argued that developed countries monopolised Pfizer and Modernavaccines for their own populations while refusing to make them available to developing countries.

On January 20, 2021, Bhutan and the Maldives became the first two countries to receive 150,000 and 100,000 vaccines, respectively, as part of Modi's "NeighbourhoodFirst" strategy declared at the start of his first term in 2014. On January 21, Bangladesh and Nepal received two million and one million doses, respectively. 1.5 million doses were given to Myanmar, 50,000 to the Seychelles, and 100,000 to Mauritius. The US State Department, the WHO, Bill Gates, and others have all expressed their gratitude for India's selfless assistance with vaccines to many developing countries.

Observers also praised India's quickness and selflessness in distributing millions of doses as aid amid the huge demands of its own vaccination campaign. Though China's hostile and intimidating demeanor is on display around the world, India's compassionate and loving attitude is on display.

India's 'Vaccine Maitri' program has bolstered the country's credibility as a first responder in emergency situations. This is all the more impressive given that only five countries have been able to successfully produce Covid-19 vaccines to date.

itsvery proud moment for every indian ! all indian must be thankful to all Scientist, Contributors & leadership of nation !

Here is the complete statistics about Vaccine exportation under the #Vaccine_Maitri Program ByIndia.